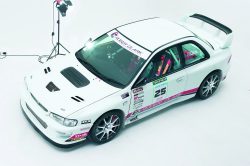 Here at Fine Line Imports, we love to talk about specialty race cars and all they can bring to the table. This is why we love to talk about the fact that Roger Clark Motorsports has been working on something that they like to call the Race Car Gobstopper III. In fact, this vehicle has been in the works since before COVID-19 came down upon the world, but the team had not been able to race their car because so many races were sidelined due to the spreading virus.

That said, it is a beautiful machine that has people stopping to turn their heads and check it out. In fact, there are a lot of reasons why people are checking out Roger Clark Motorsports, and we wanted to share a little of their story.

Rally Racing and Time Attack are two things that Roger Clark Motorsports is deeply rooted in. They have competed in both of these racing varieties before, and they have upped the level of performance of the Subaru WRX or STI when they use it for racing purposes.

The Gobstopper III is their latest project, and it was revealed in 2019. The beauty of this project was that it was a leg up on their Gobstopper I and Gobstopper II. It was set to take things to another level. Like so many other things, though, many races were canceled in the 2019 timeframe, leaving Roger Clark Motorsports unable to take on the racetrack with their latest invention.

The Gobstopper III Improves on Past Vehicles

One thing that can assuredly be said about the Gobstopper III that can’t necessarily be uttered about past vehicles presented by Roger Clark Motorsports is that it has greatly improved upon things they have put out in the past.

The new chassis is one area frequently commented on by those who have examined this vehicle and believe it to be a big improvement. That is just one thing that it has going for it, though. The team is also very pleased that they clearly took on the best elements of the Gobstopper I and Gobstopper II and put them into the Gobstopper III they have now built.

The team has now created some promotional videos about the Gobstopper III that they have been proud to show off, and they are still working on even more up-to-date materials for the vehicles they put out next. With this in mind, it is clear that nothing will stop them from creating a once-in-a-lifetime racing experience for all of their fans and everyone who loves the sport.

It is clearly the case that the team has worked hard to reach their goals, and they are still striving for greatness.