There were lots of very cool JDM-Spec cars in Hong Kong. For those who do not know, Japanese spec cars are 100% legal and allowed in Hong Kong. Some of the rare cars found were, Subaru WRX Type RA V6 (yes, with the 5 speed DCCD transmission and a 8000 RPM redline), Subaru V5 Type R, a couple Subaru STI V8 wagons (with the wide flares like the sedan version), Honda Civic SIR and a Nissan Primera. There were many other exotic JDM-Spec cars in the city, but I did not get pictures of them.

Thank you very much for everything Alain, Gregory, Kolo, and Joe! 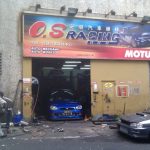