Once again Team Up Two Mountains has proved that years of hard work, money and time eventually pays off.  FLI wants to congratulate Jon and Tucker for there hard work and dedication.  FLI is looking forward to the last race of 2009 (Seed 9 Rally) and the 2010 race season!

Here are Jon Burke’s words from the event:

Up Two Mountains Rally Team: Jon Burke and Tucker Heiner were pleased to finish all 8 stages of the 22nd Annual 2009 Prescott Rally! We finished 6th overall (out of 29 total competitors), and 2nd in the Open AWD class.

The finish was hard fought, as we had a big ‘off’ on stage 6, and a flat tire on stage 5, we were running out of spares, fast!

We actually lost very little time with the ‘off’ and were able to replace the front right control arm at service with NO road points! The flat, however, cost us several minutes on stage, and then we got stuck in the dust of a slower competitor and couldn’t get close enough to pass…that cost us 5-6 minutes and as you can see in the final overall results, that would have put us in the running for 2nd place overall (oh well, that’s rally!).

Learned quite a few lessons about self-control, the ‘mentality’ of racing, and keeping one’s cool…as well as learning to grow and pair and how to take corners at +75mph! 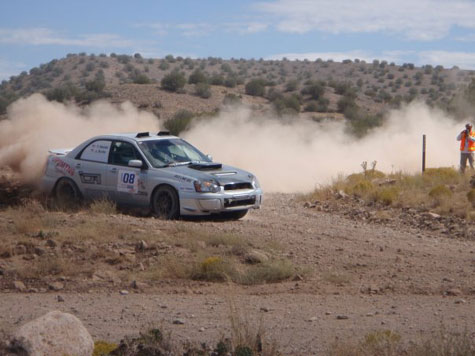 (Jon Burke and Tucker Heiner Come Flying out of a ‘Left 3’ on Stage 6 Ssaturday Morning. Photo by: Mustafa Samli)

Stage 1 – Drove like my grandma to get used to the car, the roads (BIG +200ft exposures!) and the brand new Lassa rally tires we’ve never used before.

Stage 2 – Picked up the pace a little bit, getting faster, more key experience.

Service 1 – Car and engine are running tip-top, but saw our times on Stage 1… time to pick up the pace!

Day 2
Stage 5…got a little cocky on one turn and that’s how we lost a tire. See the video here: Prescott Rally Stage 5

Stage 6 – Stage 5 in reverse, with the lesson learned, we drove fast but smart, a

mislabeled turn at the end (was labeled a 5, should have been a 4) and a lot of spectators

(lesson #2 learned: ignore spectators!) snuck up on us and we went off pretty hard, but the car took the abuse and kept on going…we finished the last 1/2 mile and put up a decent time.

Service – Went 9 miles back on a de-beaded rim….NO damage to the Lassa rally tire (other than the de-bead), AND it also protected my TD rim….I LIKE these tires. Replaced control arm and re-set the car in 40 minutes with help from DirtyImpreza crew member, Zach Dickinson.

Stage 7 and 8…had some alignment issues because we borrowed a GC arm and forgot the washers, car still drove pretty good and we put up respectable times to finish 6th over all.

Next…we’re trying for a waiver to compete at Seed 9 Rally this December 4-5th, but the event is sanctioned by Rally American, and I don’t have 18 coefficient points required for all drivers in Open AWD turbo cars. If we can’t run Seed 9, this is our last event for 2009, and we’ll be making plans to run the full California Rally Series Championship in 2010!

Last…a big thanks to all our sponsors, Michel Hoche-Mong (HANS, Intercom and trailer), and Eli Gilbert (another HANS!).

UP2MTNS Rally Team is proud to be sponsored by: