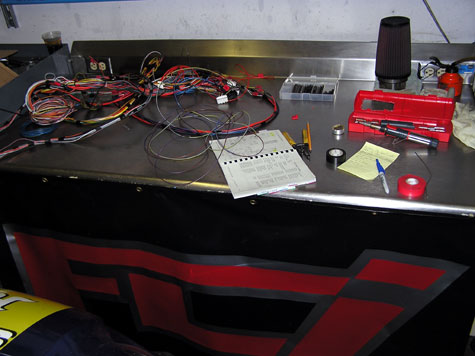 With any complicated, high-horsepower engine setup, an efficient, and powerful ECU is required to safely control all the functions properly. In this case, FLI chose to run a Link G3 Plus wire-in stand alone ECU. At the time of this build, the E-Throttle plug-and-play unit was not available, so FLI custom-made a plug-and-play wire harness that would work with this custom engine setup. One of the most significant changes in using the Link ECU vs. the factory ECU, is that the factory mass air flow sensor can be eliminated. The reason for this is because the Link ECU uses a custom version of the speed density system (you can use the mass air flow meter if you wish). The Link ECU looks at the barometric pressure sensor, manifold air pressure (MAP), and divides them to create a manifold gauge pressure (MGP) calculated load. This system works extremely well, but you must use an aftermarket intake air temperature sensor so the ECU knows the temperature of the intake air charge. The Link G3 stand alone ECU includes most of the features of the new Link G4 ECU, but cannot control an electronic throttle pedal setup.

FLI converted the gas pedal from electronic to a standard cable, just like 02-05 USDM WRX’s, or all JDM WRX/STI’s (pre-GR series). The customer loves the feel of a cable setup because you can mechanically feel the throttle, and it is a much more linear feeling. Boost will also be controlled with the Link ECU by a closed loop setup, which can be set up in the software. All the radiator fans, a/c fans, a/c clutch, idle, timing, boost, and fuel settings will be controlled by the Link G3 ECU.

Another useful feature of the Link ECU is the ability to control a methanol/H20 spray kit. With the use of 91 Octane California fuel, the customer had decided to run the Aquamist HFS-5 methanol/H20 injection system, which had already been installed by us last summer. The only change to the system, is that now the Link ECU can control the methanol/h20 spray map (3D) by either using manifold air pressure (boost), or fuel injector duty cycle just like the HFS-5 kit comes with (Fuel Injector Amplifier controller). The Link ECU can also be wired to automatically change to a different timing, fuel, and boost map if the ECU detects a clog in the methanol line (by a pressure sensor), or if activated by a mechanical switch.

Overall, FLI and the customer are very happy with this setup, and we are looking forward to making some power!  Check back for updates after the engine is broken in. 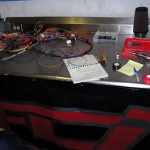